Once a child is becomes more competent in his or her ability to think multi-causally, the next focus of higher level social-emotional thinking is the capacity to understand the gray areas of life. Adolescents and young adults with Aspergers or HFA are especially prone to hitting an emotional rut when speaking in terms of “never” and “always”—hallmark terms associated with “black and white” thinking. 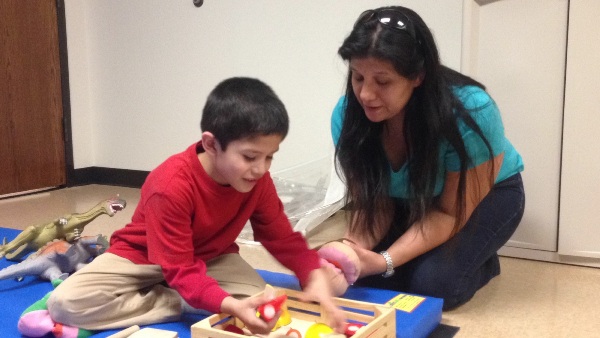 “He never calls on me during class” or “She always gets to play the game first” are common phrases that parents or peers hear when the speaker’s ability to think and feel in more varied degrees is constricted. Not only is this harder to negotiate socially for the partner, but it’s not a very fun state for the black and white thinker either. Such polarized patterns of thinking can lead to social isolation brought on by the extremity of the speaker’s emotional response.

Getting unstuck can be supported through Floortime, where the parent or the therapist can spotlight the child or adolescent’s black and white ideation.

For example, Jason is a young teen with Aspergers who states that he never gets to play his media after school. Jason becomes agitated when discussing this with his mother and his therapist, flooded by feelings of anger and sadness that he has difficulty modulating.

The role of Floortime therapist or supported parent in this dynamic might be to:

Jason’s own wheels of recognition of the gray are now turning, which is important. He has internalized the error in his thinking and has been ushered to the gray area by the therapist/parent’s comments.

Gray area thinking can happen any time the child or adolescent is engaged in comparative dialogue as well (e.g. why MarioKart is better than Minecraft or why pizza is preferred over spaghetti).

Practicing to think flexibly in a safe relationship will strengthen the individual’s capacities in finding “the gray,” or the varying degrees of a situation or emotion. This will eventually support increased harmony within the home and school environments, as well as within the individual themselves. The world is a complex place and giving an individual with Aspergers or HFA—and even sometimes yourself—the opportunity to practice gray area thinking is a gift that keeps on giving.