Note: This was one of our most popular posts and we thought it worthwhile to share again…

Occasionally in life, if you are lucky, you brush alongside greatness. Not celebrity, but greatness. A person truly inspired to invent, revolutionize, and create with the added momentum to actually implement their gift toward worldwide betterment.

I was blessed to have been afforded many hours with such greatness.

Eustacia Cutler was born into a privilege that most only have viewed actress Grace Kelly portray on film. Her book, A Thorn in My Pocket, depicts her life in a nostalgia that few today can even begin to imagine. Her Cotillion, the Dedham Polo Club, times at the Vineyard, life at Cambridge, Harvard, and stories of shared company of notables such as Winston Churchill, George Gershwin and Robert Frost. Talk more with Eustacia, and you will learn of her father’s invention revolutionizing flight. However, all of this is not the sum of the greatness of Ms Cutler. You’ve heard the statement not everything that glitters is gold? You see, Eustacia was married and had 4 children, one of whom had Autism. 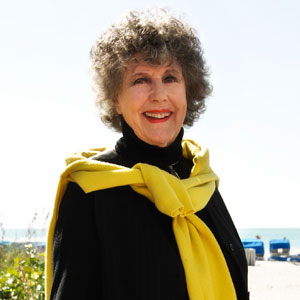 In the 50s the pressure to institutionalize such a child came from doctors and family members. But when the pressure came from her husband, she went completely against the grain for the sake of her child, Temple.

Yes, as most of you know Eustacia Cutler is the mother of Dr. Temple Grandin. Dr. Grandin who went on to revolutionize the cattle industry as well as turn the world’s perception of Autism on its ear. Most of this information you probably already know, but the part you do not know is the day I was afforded time alongside Eustacia Cutler.

The 23rd Annual Texas Autism Conference was held in Corpus Christi this past week, and Sam and I had been asked to speak at one of the break-out sessions. The keynote speaker was Eustacia Cutler, who at the age of 88 offered such valuable and insightful information to the thirsty crowd of educators, parents and professionals, they were brought to their feet more than once. Her clarity, concern and connection with all in the room (primarily the mothers) intrigued my autistic son, Sam who was one of 4 to jump at the chance when the offer came to come up to the podium alongside her for a personal Q & A. When Sam (one of very few males in attendance) approached her and announced his name, and that he had Aspergers Syndrome the applause resonated with acceptance. Sam poised the question if Ms. Cutler was familiar with Moore’s Law which states that technology will grow at an exponential rate and if so, how does she perceive it will affect people with aspergers? Without missing a beat and looking my son straight in the eye she stated we, as humans, have a challenge ahead of us. Technology is essential, but perhaps Sam could be a forerunner bearing the seemingly impossible task of keeping the human factor within the technology field.

Her mind ever-sharp and in the moment allowed for many ‘ahh’ moments to walk away with. Here are just a few:

Ambivalent Fathers – Eustacia spoke of a man she had met with a withered arm and hand. The man spoke of his absent and abusive father who later in life admitted his son’s disfigurement had frightened and intimidated him. His father felt that since he could not “fix” the disability, he rebuked his own son. This is a problem that needs repair in many homes, and Ms. Cutler explained that this fear may be a reason for so many divorces.

Empathy vs. Sympathy – Understanding the difference helps explain autism. She went on to explain that empathy is when you can actually feel the person’s pain when they cut their finger, as opposed to sympathy with is more of a learned behavior or intellectual act. People with Autism/Aspergers can only learn social behavior by imitation. Eustacia discussed “mirror neurons” and recommended researching the studies of neuroscientist Vilayanur Subramanian Ramachandran, who is one of the first to suggest that a loss of mirror neurons might be the key deficit that explains many of the symptoms and signs of autism spectrum disorders.

Mother’s Lost Identity – The identity for both mother and autistic child can be shortchanged. From a neurological standpoint, “If my child does not know who I am…then who am I?”  Eustacia posed this question more than once to make the point, if not strongly suggest that Mothers need to build their own identity. This was my personal favorite portion of her talk! You as the mother must not morph into your child and his/her autism or you won’t exist yourself. This is a strong statement that bears reading more than once. You cannot help your child if you lose your own identity, in which case both are lost. Eustacia’s suggested solution is her experience, and is discussed in the next topic.

Give to community and community will give to you – Eustacia spoke of her life with Temple. By evenings she gave her time to community theatre, and Sunday mornings to teaching Sunday School, and the people surrounding her gave back. Temple then had exposure to others who included her, or at the very least continued normally around her. These interactions offered insights and external exposures to Temple, that otherwise she would not have experienced. Same with Tom Mead whose severely autistic son was afforded a life outside of ‘all things autism’ when Tom became involved in his community. He served on the school board, and contributed to the town’s political scene. Tom’s involvement with his community offered his son a normalcy and balance outside a world that just consisted of autism.

The conference continued and Sam and I spoke at our session “Solutions for school-age children diagnosed with High-Functioning Autism and Aspergers Syndrome.” We were engaged longer than our allotted time when many stayed to discuss audience member’s personal questions (which is what makes these conferences so great), and we realized we only had minutes left for lunch. What luck! Seems most all other presenters had eaten and left but Eustacia Cutler. Again time spent with this woman was magnificent. 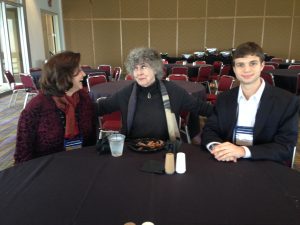 We discussed her daughter Temple and Sam proceeded to tell her how Temple – who we had the privilege to meet on several occasions being part of our documentary on Aspergers – taught him how to shake someone’s hand. Pleasantries where exchanged but the connection of  our entwined lives and the similar paths thrust upon us by Autism made for an undeniable bond. You feel it . . . it’s probably why you’ve read this as far as you have. We as mothers to a special child are connected through tears, fears and overwhelming joy each time our child reaches a milestone we thought unobtainable. Isolation melts each time we feel the presence of a kindred spirit and that day being near Ms. Cutler was no less a marvel for that very reason. I had not met her before that day yet I felt I was home alongside her. I felt that she did the same. Perhaps that connection was with each and every mother attending that day but it was definitely with me sitting alone beside Eustacia in discussion about theories and absolutes involving our autistic children and the world around them. (I love the photo to the right as it perfectly reveals two mothers connecting, and the beautiful mind of my Asperger-diagnosed son Sam!)

Afternoon break-out sessions gave way to the Welcome Reception and Parent Panel discussion where I was blessed to have been asked to be a part of. Sitting alongside Eustacia Cutler on the panel was, I must say, ‘heady’, but here we were shoulder to shoulder among anxious parents with burning questi 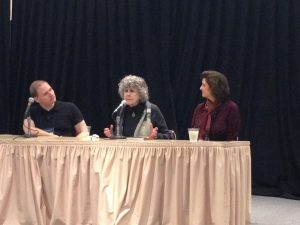 ons. Dr. James Williams, an astoundingly brilliant, yet open young man with Aspergers Syndrome, also served on the panel offering his clinical experience with the insight of living on the spectrum. The questions came like rapid-fire in various forms. The well-earned respect for Ms. Cutler was witnessed each time she drew a breath to respond. You could feel the anticipation for her well-educated response and she gave each person their fair due. Questions came from a sibling of an autistic younger brother who accompanied by her mother posed the question of how to deal with anger for those bullying her brother at school. All 3 of us on the panel chimed in to the distraught teen with the advice: it’s the bullies who have the real problem and not only they, but you should be offered counseling.

A neutral person to allow siblings to vent to is very healthy due to all they must endure . . . not just from the bullying, but from often being placed second in the home-life. Other questions were from mothers who needed affirmation in their care for their special needs child, after all, we all shared the undeniable bond of a journey with a child on the spectrum. For this end, Ms. Eustacia Cutler represented the road we all wanted to travel. To have fought, (and did this woman fight!) persevere and most of all, know that your child is living the best life possible under their diagnosis . . . well, that’s we all aspire to . . . and isn’t that the best way to describe your hero?

Personal recommendation: I highly recommend reading “A Thorn in My Pocket” by Eustacia Cutler. If you are a mother of a child on the spectrum, this book is your guidepost! By the way, she told me that during the filming of the HBO Film “Temple Grandin,” Julia Ormond (who portrayed Cutler) carried a thorn in her pocket throughout the filming because it was a reminder of who she was portraying and the plight therein. Ms. Cutler told me that the ‘thorn’ was NOT her daughter Temple, she explains it’s meaning in the forward of her book! 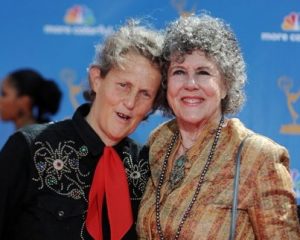 Brief Bio: Eustacia Cutler, (pictured here with her daughter, Dr. Temple Grandin) earned a B.A. from Harvard, was a band singer at the Pierre Hotel, New York City, performed and composed for NYC cabaret, and wrote school lessons for major TV networks. Her research on autism and retardation established the base for two WGBH television documentaries: The Disquieted and The Innocents, a prize winning first. Her 2006 book A Thorn in my Pocket, describes raising Temple in the “Leave-it-to-Beaver” world of the 50’s when children with autism were routinely diagnosed as infant schizophrenics and banished to institutions.

6 thoughts on “A Day with the great Eustacia Cutler!”