If you have never created a movie, the sheer technology of it might seem overwhelming. You might be surprised how simple it can be if you know just a few key features. If you have access to Movie Maker on a PC, then here is some information that will help you through.

How to Make a Video

With Windows Movie Maker in Windows Vista, you can quickly go from just watching movies to making your own great-looking home movies and sharing them with your family and friends.

You need to import the video, digital photos, and music that you want to use in your movie.

There are two ways to get this digital media into Windows Movie Maker: 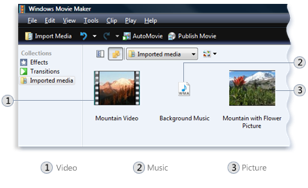 When you make changes in Windows Movie Maker, the original files aren’t changed. So try different things when you’re making your movie—don’t worry, the original source files are safe.

After you’ve got your files in Windows Movie Maker, you can start editing.

Now, it’s time to take your movie to the next level by adding special, personalizing touches, such as titles, transitions, and effects.

Titles and credits. You might want to add a title at the beginning of your movie that tells people a little bit about your movie, such as when, where, and what happened. And you can add credits at the end of your movie to tell the world who created and starred in it (just like you see in movie theaters and on DVDs).

Transitions. To make your movie look nice when one video or picture ends and another begins to play, add transitions between pictures, videos, and titles on the storyboard. There are more than sixty different transitions in Windows Movie Maker to choose from, so play around and use the transitions that look nice to you.

Effects. Finally, you might want to add some special effects to videos and pictures on the storyboard that’ll give your movie the appearance you want. For example, add one of the Film 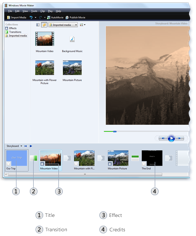 Age effects make it look like an old-time movie.

Here’s a picture that shows different transitions, effects, titles, and credits that are added to the storyboard

Narration. You can take it a step further by adding a narration to tell your story in your own words. This works well if you’re making a movie that just has digital photos. Remember, you can preview your project at any time by clicking the Play button under the preview monitor in Windows Movie Maker.

Step 4: Publish your movie and share it with other people

When you’re happy with your project, you’re ready to publish it as a movie. When you publish a movie, everything you added to the storyboard/timeline is combined and a new video file is created (this is your final movie file). You can then use a media player, such as Windows Media Player, to watch your movie on your computer. 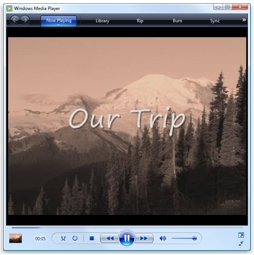