0 Comments Share Tweet Share Pin It Print Email
Occasionally, if not rarely,  you come upon greatness. You are in the presence of a person, an idea or a creation that inspires you to the core and will make such a difference in your thinking that it changes the trajectory of your life’s path. This type of greatness occured for a roomful of people last week at an event Aspergers101 hosted in San Antonio Texas.  Unlocking the Potential: An Evening with Dr. Temple Grandin proved successful by the powerhouse line-up of speakers. Over the course of the next several weeks, Aspergers101 will share much of the knowledge and encouragement delivered from the podium by these speakers but we wanted to offer a glimpse into the evening with this introductory blog. 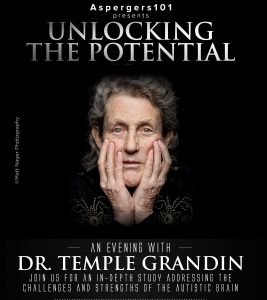 An overview of the evening “take-aways” all followed the theme of the evening, Unlocking the Potential which was consistent with each speaker that approached the podium. Addressing the challenges that come with the Autism diagnosis is a must however, rethinking the potential and putting that potential into it’s unique purpose was the resounding message through the various perspectives of the speakers.
The evening was hosted by Jennifer Allen and son Samuel Allen offering personal stories, an update on the statewide “Driving with Autism” program and keeping the podium synchronized speaker to speaker.

Message From the Texas State Capitol

Kicking of the evening was Ron Lucey, the (powerhouse) Executive Director of the Texas Governor’s Committee on People with Disabilities. His message of support for all disabilities was only surpassed by his focus on our citizens diagnosed with Autism and improving conditions for employment in the state of Texas.  This is a man of action. Ron Lucey works, no fights, on behalf of citizens with disabilities.
He made it clear that it’s the Mom’s who make 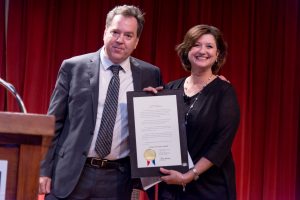 things happen and he and his committee are there to support them in their mission for equality.  He did read a proclamation made recently by Texas Governor Greg Abbott, declaring April Austim Awareness Month in the State of Texas. This was presented to Jennifer Allen with Aspergers101 at the end of his talk.
Following Ron was a brief video from speaker & author Dr. Gail Saltz. Dr. Saltz recently wrote ‘The Power of Different’ and included much of that book in her presentation. From a medical statepoint, the brain is wired differently for those on the autism spectrum and the ‘gifts’ that are unique to that brain are the gifts humankind is lucky to have. It’s these specialized talents that we must utilize for the their future and ours. Here you can view the message from Dr. Saltz in it’s entirety.

The next speaker super charged the evening with the topic of employing those with Autism. Tina James is the Chief People Officer of one of the top-rated businesses in America today. H-E-B Grocery is a giant  grocery chain in the state of Texas and is swifty becoming the template for all business structures as they clearly place people first. When Tina spoke of a new program H-E-B is premiering called, Bridges, she spoke from her heart. Tina has a son on the spectrum and her passion for equality in employment literally set the audience on the edge of their seats! 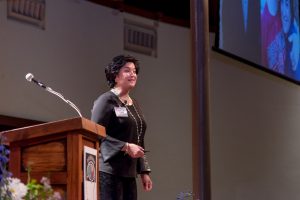 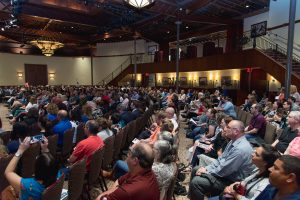 Bridges launched last summer with an internship offered strictly for those with an autism/asperger diagnosis, in the coveted I.T. Department. The rate of pay was not the standard national average of  $8/hr but double that rate…autism or not! This is only the beginning of what proves to be a smarter way of employment: hiring people for their abilities while removing the obstacles then advancing them up the ladder into the company that continuously grows off the charts. The ovation with this proactive approach to employment was only paralleled by the next speaker.

The keynote address from Temple Grandin was supercharged.
We heard many conferences in which Dr. Grandin spoke but she seemed animated and fired up for the San Antonio audience giving of herself as well as expected information on living with autism. After applauding the efforts of H-E-B and it’s vision for hiring those with the diagnosis of Autism, she quickly offered insights from her own life and early on teachings from her Mom, Eustacia Cutler. 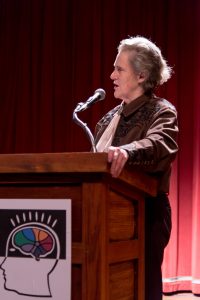 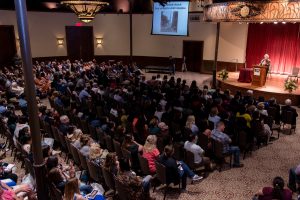 Most would think it would be merely common sense to pass on such suggestions teaching manners, work ethic and finding your specialized interest(s) but her speech of old school seemed new as the audience knew this to be true. Facts and statistics were tossed in such as the rate of Autism diagnosis today, the education system, the job market and it’s challenges, and where we should go from here. 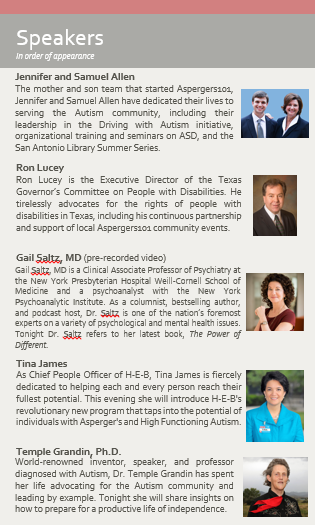 Many of the personal stories of inspiration from that evening keep pouring in! We wanted to share some with you here:

“I loved her thoughts about teaching social skills like they are in a foreign country. I also loved the concept of going in a back door whbe a more direct route is unavailable. So much wisdom!”

“The big takeaway from this event for me was the importance of getting early work experience for those on the spectrum.”

“Seeing Temple’s enthusiasm for her work and how her career developed over her lifetime. It is good to know that developing a child’s interest can sometimes unfold and become a path to work and career.”

“My son was diagnosed a few months ago at age 23. This was my first event. I came away with hope. Tina and Dr Grandin were inspiring. We need to get the rest of the corporate community on board. Let’s start right here in San Antonio. The business world and world at large needs those on the spectrum participating fully or we all miss out. I am still learning but this program got me fired up. Thank you.”

We will be sharing more of the messages from each of these speakers within the next several weeks right here on Aspergers101. We want you to share them, pass on anything that inspires you within your home or community as you see the need. We are that, a community! If we can share information that will help someone with Autism grow into their potential, into the person they were gifted to be…then collectively we’ve made a difference!