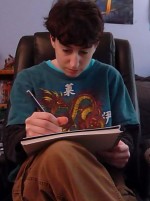 Nikki is the creator of the webcomic “AuTalkz”. She has Asperger’s Syndrome and found relief from panic  attacks by doodling. Nikki wanted to make a comic which went back to the “bare basics” of past comics:  ones l  like Calvin & Hobbes which could teach lessons and procure laughter without the use of bad language and-or  graphic violence….she called this comic strip “AuTalkz“. “The idea was for the opinions and comedy to come  from the viewpoint of someone with ASD.  I decided to branch out and do something I’ve always wanted to  do:  Help people understand autism.  My hope is that my comic can help promote understanding, particularly  teachers who have students on the spectrum, parents who have children on the spectrum, and even kids and  workers who have classmates and co-workers on the  spectrum”. We would agree and are proud to feature  Nikki and her fabulous work, AuTalkz, on aspergers101.com