While he may not have had interest in what I thought a young boy should be interested in, he has opened my eyes to a different world that has brought us closer together over the years. I just had to be the one to approach his interests with an open mind and with the idea that these were things we could do as a father and son.

Some words of advice from a father of an aspie, learn to be a listener, take interest in his acti 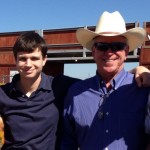 vities, not those you think a young man should take interest in, find things to do outside the home that you can teach him and he is interested in.  Also, be supportive and patient as typically those with aspergers will find it difficult to relate to things we take for granted as well as conveying their thoughts in the same manner we are accustomed to.  They will never forget the times you spend with them and the memories you are making.