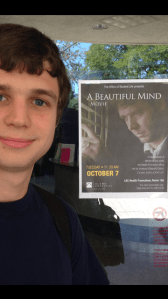 In 2001 Film Director Ron Howard released “A Beautiful Mind” to the public, and I was one of the first to attend. After all, actor Russell Crowe portrayed the great Nobel Peace Prize winner John Nash, and I knew I was in for a great film.

By the time the second scene rolled out I was painfully frozen as the character (portrayed to perfection) John Nash was so strikingly similar to my son Sam, in both action and peer reaction.

The tears began to flow.