Amine Al-Bahloly  has a busy social life. He is a leader for an adult Asperger Support group in San Antonio Texas where he has also been employed as a security officer among other jobs. Although he has assistance running the support group, the many outings it’s members enjoy makes us take a second look at this unique man. Though short with his responses, we thought a look at his life and how others may want to contemplate a similar support group in their city would make for an interesting read. More about Social/Support Groups at the end of the interview.

1) First, tell us a bit about yourself Amine! 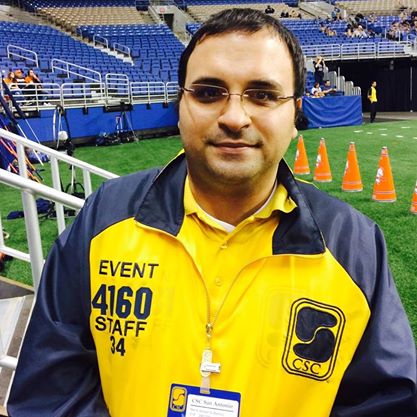 I love living with aspergers.  It has it’s advantages, like just being more detail orientated. I’m 28 years old and my resume reads:  Eagle Scout, Order of the Arrow Vigil Honor Member, 4th Degree Knights of Columbus. I am proud of my Roman & Maronite Catholic faith & spirituality. I have two associates degrees, one in computer information systems, from Palo Alto College in San Antonio, Texas. I currently work at Contemporary Services Corporation in Security/Event Staffing.

2) How did you come to take part in the San Antonio Area Adults with Aspergers Syndrome Support group? I heard about this through Dema Stout and eventually became it’s leader. This support group been around for almost 5 years

3) What kind of activities do you do in your group here in San Antonio? Movie/Video game socials, attend monthly meetings as a group and upcoming events dealing with autism. We interact well with each other as a group.