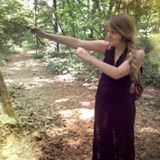 My name is Shaina Cilimberg and I am almost 27 years old. I was diagnosed with Asperger’s in the Dark Age, the 2000s. Back then, there was limited knowledge on Asperger’s Disorder. It was a time when mental illness was seen as demon possession or an excuse for sin. While Satan does attack everyone’s (neurotypical or not) minds, mental illness is not demon possession. Demon possession has more to do with the individual, not with mental disorders. Mental disorders are not made up excuses for sin, but real chemical imbalances in the brain. Add that to the fact our frontal lobes are not completely developed until our mid to late twenties.

It took me a while to actually accept that I have Asperger’s. Then, I found out more and how the traits related to me. See, some people (including professionals) will say you do not have it, while other say you do. I think people need to educate themselves on what Asperger’s/Autism is and realize we are not the same.

While some of us are introverts, others are extreme extroverts. I’m an extrovert.  When I get an outfit I like or haven’t worn the outfit I like in a while, I want to be seen in it. I really enjoyed reading the Diary of Anne Frank because I saw myself in her. She was fun and bubbly. She was different from those around her because of her personality. She wasn’t boring.

Today, I read something on a blog about how my fellow Aspie girls and I have a tendency to root for the underdog. I guess that’s why I like Jack Frost from Rise of the Guardians so much. He is misunderstood and faces constant rejection and I have experienced that a lot in the past. I really like “Let it Go” from Frozen. I struggle with OCD, Asperger’s and vertigo and it just is a good way to tell people not to worry so much.

As a Christian, I need to trust Jesus, but it is so hard. All the stresses of life, worries and fears get in the way. I see others have seemingly better lives and feel depressed because mine isn’t perfect. Yet, I want to help others.

I do have to warn you: I’m like most females who have a thing for angsty male characters. Selena in To Be Sane is an angsty female, though and Lydia could be considered that in Perfect Forgiveness. I am currently working on a Christian Fantasy novel, which will take a while. I want to really make sure it’s well-written.

The best way to overcome insecurities where you are in life is to not compare yourself to others. We should have Christ-like role models to imitate as they imitate Christ. However, we should not mope because someone’s life seems so much better than ours. I may not be popular or “normal”. I may be boring to some and outlandish to others. I’m me. As long as I try to improve myself as a human being, that’s all that matters. I don’t need to sell my soul to the Devil to be happy and I refuse to. I burst into songs from Frozen and am obsessed with Rise of the Guardians. As long as I don’t put those two over Jesus, I’m fine.

I am so grateful for Rise of the Guardians because it is a great example of how to write a story and character well. I want people to feel towards my book’s characters the way I feel towards Jack Frost. I want them to feel for and relate to my characters. I want to write my characters showing emotions in different ways than just the same old same old. Rise of the Guardians does so well with that.

One of my struggles with OCD and Asperger’s is the intrusive thoughts. They really bother me and won’t go away. If you believe in prayer, please pray for me. Even if you don’t, think about us who suffer. We are people with goals and dreams. We do not want to be overlooked by the system any longer.
By Shaina Cilimberg