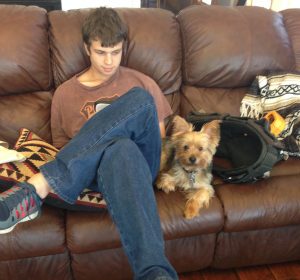 If you have a child with Aspergers who interacts well with animals, there’s no need to be surprised. People with Aspergers tend to bond more with animals than they do with people. In fact, many neurotypicals would see Aspies as animal whisperers due to how well they bond with animals.

One time, we visited someone who is a gypsy and she owned some cats and dogs. Seeing as how I like animals, I began petting them and they liked it. When she saw that her animals had immediately taken a liking to me, she was surprised and said it was as if I had a gift where I can bond with animals.

That scenario was a perfect example of how Aspies and animals are like bread and butter. I have a Yorkshire Terrier who I love to be around. I encourage any parent with an Aspie child to get them a pet that they would love to bond with. Whether it’s the classic dog or the trustworthy horse, having pets can prove to be very enjoyable for both the parents and the child.

As a parent to a son with Autism, companionship was what I had desired for Sam especially during those challenging school age years. With no prospect of birthday party invitations or after school gatherings, I worried (turns out far more than I needed to) for Sam’s emotional needs. To this day, Max (pictured above with Sam) offers just the right amount of support.

Not just for those on the Spectrum

Animals will seemingly listen and not judge you based on your social skills or designer apparel labels. You can vent your troubles, remain in total silence for hours or hug them and their tail is still wagging the next day! I can recall, as a little girl, moving to a new town where families had been established as friends for generations. Coming in as a middle school student had its social challenges even for a neurotypical! Compounding the isolation, I developed a near fatal form of pneumonia where I was functioning with only one lung for weeks. It was at this point that I met a stray German Shepherd mutt that changed everything…my newfound confidant, Nellie Jean.

That dog walked me to the bus stop every morning and was there waiting for me upon my return. Our walks in the nearby woods, rides on the tractor and adventures that mirrored much the book Because of Winn-Dixie  afforded a lonely, gangly girl unconditional friendship. Companionship is a fundamental need in all of us. However when diagnosed with Autism, Asperger Syndrome or a social disorder, companionship might be difficult to come by…especially in  the early years.

Consider a pet to fill in those gaps, whether for your school-age child or for yourself as an adult. Adjust your choice of pet to fit your means whether financially (hamster to horse) or geographically (apartment to suburbs) just so there is a pet to care for…and to care right back.

4 thoughts on “Pets and Asperger Syndrome”