Lao Tzu said it best,”A journey of a thousand miles starts with a single step.” If this holds true, Maverick Crawford III has certainly walked many miles as a person diagnosed with Autism. Aspergers101 is proud to have Maverick as a regular blogger as his insights into overcoming seemingly insurmountable obstacles proves to be a favorite among those seeking inspiration. Today, we feature Maverick in a one-on-one interview as he discusses his recent award from the University of Texas at San Antonio, the COPP (College of Public Policy) Most Outstanding Student for the 2017-2018 academic year and the hardships he overcame to achieve success. 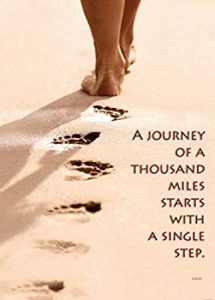 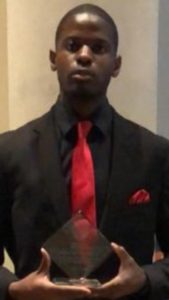 What did it mean to you to win the most outstanding student award?

A few days before the ceremony, I received several emails from a staff working for the Associate Dean of COPP. The emails were in regards to have a meeting with Dr. Romero in the in her office and then by Starbucks, but then I was in for a surprise the next day. I come to meet Dr. Romero at Starbucks, but she has not arrived, and two minutes later she came out of an auditorium. She asked for me to talk to some high school seniors and I accepted, and that’s was when she announced that I won the Most Outstanding Undergraduate Student Award. For the longest time even on the day I received the beautiful glass award with my name and the name of the award, it seemed like a dream to me. I would have never thought I would win. I was in disbelief and shock, but I was extremely humbled to receive the award.

Tell us a little bit about your role while you interned at the U.S. Pretrial Services.

I deal with offenders on a different level shadowing officers. I got to sit in on an interview with a person who was recently arrested. I did two interviews and asked them questions about their background. These questions helped to determine if the offenders can be released on bond. I had to complete a report at the end of the interview. One of the defendants that I interviewed had autism, and I was able to explain to the Pretrial Officer about a possible sanction to place on the defendant to ensure the safety of the community, and they will appear back in court, and it worked. I told them to have detailed step instructions with kept the defendant on a strict routine because people with autism react significantly with strict adherence to a schedule. This helped me learn more about the administration of the court system and how the material I learn the classroom applies and operated.

Preparing for the Future

How did your double major in criminal justice and public administration prepare you for your future?

It prepared me for a career in public service. Those majors helped me be a better advocate for underprivileged communities. It’s vital that their voices are heard too. Dr. Patricia Jaramillo was a significant influence in adding public administration to my degree plan. She told me I could still graduate on time with a double major from COPP. Dr. Jaramillo and other professors in the College of Public Policy are dedicated to preparing the students for a career in public services by educating them through their experiences and expertise in their respective fields. When I took the public administration courses, I was able to see how the government plays out. When I took criminal justice courses at UTSA, I learned about alternative ways that not hold the offender accountable, but gets the underlying issues of their behavior like Restorative Justice, Specialty Courts, and Juvenile Justice.

Tell us a little bit about your diagnosis with an intellectual disability and autism. What was it like for you growing up?

The community I was from is set up for autistic people, people like me, to fail; without the ability to succeed in any form or fashion. Another big issue in the minority community is that mental health is not addressed and no one believes in it. Since mental health was somewhat a myth to the community, it was a struggle I endure in my life. I was diagnosed with a severe speech impediment, severe mental retardation, severe expressive and receptive language disorder, severe sensory integration dysfunction, auditory processing disorder, dysgraphia (a disorder that causes inability to write coherently), issues with motor processing, anxiety, seizure disorder, and depression. My speech impediment was so severe, I remained silent most of the time to not to embarrass myself.

The doctors told my mother that, “Your son will be institutionalized, never finish high school, never drive, never live independently, never attend college, never have a job, never be married, never have a community, and his condition will never improve. Your son will be a couch potato and live with you until he dies because there is no hope for him.” Unfortunately, my mother and family members did not know any better and believed the doctors and treated me differently from my other siblings. It was tough, and I remember my first-grade teacher telling me I wouldn’t amount to anything. She was mean and hateful. I had no one to help me and felt very alone. My brother, whom I thought I trusted, turned out to abuse me due to my autism. My family didn’t understand what I was going through and didn’t know how best to treat my disorders. I was bullied in high school. People talked about how I dressed. They made fun of my speech. I suffered a speech impediment, and it was so bad that I passed out when I had to speak in front of the class, and everyone laughed. I sometimes ate my lunch in the bathroom stalls just because I felt so much like an outcast. I would talk about going to St. Philip’s College and people would laugh because they thought I was too dumb to be a college student. They told me that I would not last one second in college because I was just some retarded and too autistic for college. No one taught me how to study, communicate my needs, or anything to help me be successful in college, so I was lost with no one to guide me I asked myself, Why me? Why?

You have overcome many obstacles in your life. What motivated you to succeed and inspire others to do the same?

While a student at UTSA, one of my instructors Gina Amatangelo encouraged me to give a speech. She knew I was timid about talking in front of others. In the capstone course for the Minor in Civic Engagement, we got a chance to mentor students from Lanier High School. I told them about my hardships growing up, and I felt a sense of fulfillment because, at that moment, I could give back to someone else what no one gave to me — encouragement.  I let them know that no matter what situation you find yourself in, never give up on your dreams and don’t let anyone tell you that you don’t have the aptitude or capability to make something of yourself.

What was the turning point in your life after suffering from physical and emotional abuse?

After everything I went through, I realized I needed to beat this. I decided to stay in school. I attended St. Philips College in 2014 and transferred to UTSA to continue my studies in criminal justice, despite having autism and the negative comments people told me in regards to attending college.

What do you like to do in your spare time?

I enjoy my volunteer work with children of autism at UTSA’s Autism Center. I write blogs to share my story with others who suffer from autism through several organizations like Aspergers101. I like to speak to some of the kids in the juvenile probation department and Any Baby Can. I want to give back and be an example to them, so it’s my way of encouraging them never to give up and give them everything positive that I never received.

Looking Toward the Future

Where do you see yourself in the next couple of years?

I’m thinking of starting a nonprofit organization and authoring a book to inspire youth who may believe there is no hope for them to succeed. I also planned on continuing my education either attending law school or obtaining a master’s degree. If I receive a master’s degree, I plan on going down the social work or public administration route to ensure that I have the tools to make a big difference in the autism community and to those who have been afflicted or placed at a disadvantage.

No doubt Maverick has and will continue to live up to his name. He has chosen to blaze a trail for those challenged with obstacles by simply taking one step at a time. One step and then the next toward a goal he was told was impossible. All of the sudden my dreams/hopes seem a bit more attainable because of Maverick. We thank you Maverick for sharing so much of you and your story. We look forward to being a part of your journey…you’ve come a long way!

2 thoughts on “Maverick Crawford III – Beating the Odds for Success”