In everyday life, there are thousands of things happening. Some of these are big deals while some are little deals. Many people on the spectrum have a difficult time trying to differentiate “big deals” and “little deals.”; in other words, what TO make a big deal out of and what NOT TO. This whole “choosing your battles” is something that I still have a hard time comprehending.

A few months ago, I was in my third period chemistry class. My teacher was handing back a quiz that the whole class previously took. When I got my quiz back, I saw that I was marked off three points. I was confused because I checked my work multiple times and still got the same answer. Then, when my teacher recited all of the answers out loud, I proved my suspicions. I saw that my answers were correct but points were still deducted from them. Later that class period I went up to my teacher and respectfully asked him why I got points marked off. He looked at my answers and said, “Because they are wrong!”. I wrote down these three answers: “49.00, 52.00, 53.00.” He said that the correct answers were “49, 52, and 53.” I did not understand why he was marking me down points since my answers and his answers were equal. Before I go any further, the numbers were numbers of atoms, and atoms cannot be divided according to Dalton’s Atomic Theory. He told me that because I added the decimal and two zeros, I indirectly inferred that atoms could technically be divided. I was extremely upset but didn’t show it. I sat back down at my desk.

The next day, I had a meeting with my school case manager. I told her about what happened. With math and science being her strong suit, she understood my teacher’s decision. However, she also completely understood mine as well. I was so upset that I wanted to submit a district grade dispute! I would have usually gone through the department chair, but since my teacher is the department chair, that was not an option! I was so ready to file that paperwork and get my three points back! But then my case manager asked me “Is this a big deal or a little deal?”. After talking for a while, we decided that this was a little deal because it was only worth three points and, even if I got them back, I would still have to be in class for many months to come with a teacher that would dislike me because of the dispute.

These types of situations have come up in my life ever since I was a toddler and my parents and special education team have helped me come up with some things to do in order to determine if a scenario is a big deal or little deal, along with how to act on it.

I created an infographic that you may be able to use in order to demonstrate what problems are big and which problems are little. Check it out below! 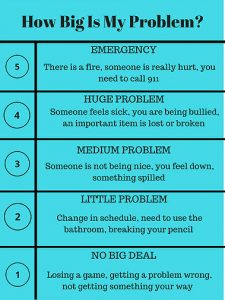 On a more personal level, I force myself to reflect. This is usually hard for me to do since all I want to do is act immediately, but fortunately, I (through mistakes of acting too quickly) have learned how to stop myself. I ask myself if this particular problem is a big problem worth getting worked up over, or if it’s a smaller deal that I should just let pass over. I sometimes even get advice from my parents or special education team if my emotions are running too high at the moment and I am not able to think clearly and reflect. If I am really angry about something that I know is a smaller problem, I sometimes think about bigger problems that my peers are facing and realize how lucky I am to only be having this little problem.

If you are on the Autism spectrum: reflect, reflect, reflect! It really does pay off to slow down and calm down! I rarely make good decisions when my emotions are too high. I am learning to take the time to calm down and think things through before I decide how I should act.

If you are a parent: help your child come up with his/her own chart to help decide if something is a big or little deal.

If you are an educator: take the time to talk with your student if you notice that he or she is about to turn something little into something big when it doesn’t have to be. Help him/her to calm down and then talk through the issue. Don’t blow them off because you don’t see it as a big deal. Your student hasn’t come to that same conclusion yet!

Ethan Hirschberg is a teenager with High Functioning Autism. In March 2017, he started a blog called The Journey Through Autism, where he shares his personal experiences, insights, and advice to individuals on the spectrum, parents, caregivers, educators, and providers. Ethan's goal is to educate, advocate, and inspire. Please check out his blog as well as his Facebook, Twitter, Instagram, and LinkedIn!