In a previous blog I told the story of how it felt when my young daughter with Autism disappeared. Today I want to present a continuance of that very important subject and some related subjects.

For any parent, the fear of their child wandering off is intense due to the obvious dangers that face a helpless child on his own in the cold cruel world. It is even more so for the parent living with a child with Autism. Children with Autism sometimes have the propensity to wander, but the protocol for locating them needs to be handled with specialized methods and care. These methods may vary greatly than those of a child without Autism. 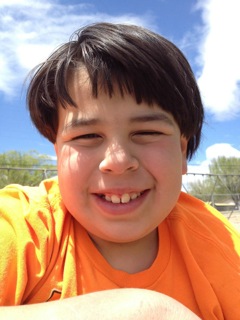 The experience can be, not unlike that of a parent of neuro-typical child who may have wandered off, deeply distressing with the impeding thought of harm coming to their child. It can also be exasperating when law enforcement responds to the parent in ways that are not so empathetic to the parent’s situation. Thus making the event even more stressful. I will share a story now: but try to remember that a parent of an Autistic child already has deep imbedded feelings over the safety of their children going in to overcome the following scenario.

One day a mother of two small children in diapers was toileting one of her children while the other was watching his favorite TV show, Blues Clues. Since it was summer and she was toilet training both children, both kids were dressed in nothing but diapers. When she finished with one and went to change the other, she realized that her second son was gone and his soiled diaper left on the ground in front of the TV. She hollered and searched but this child was non-verbal, and rarely made a sound.

After she searched for what seemed like an eternity in all of this child’s favorite hiding places and driving herself into a frenzy, she called the police.

When they arrived they questioned the woman as to why she waited so long to call. She tried to explain that not only did her child wander often but he hid often, and if the mother called the police every time the child went missing, she would have them on the phone daily. They showed little to no empathy for the woman and they began questioning her parenting skills. Asking if she had been drinking, if she was experiencing depression, and if she had been feeling overwhelmed by her responsibilities, etc.

During all this, the other child who also had an Autism diagnosis was shrieking in the other room, running circles around the room and hitting the officers, adding to their doubts about her parenting skills. The woman was beginning to show signs of being almost as overwhelmed as her second child. Children Protective Services was called in just as the father arrived home from work, this only adding to the dynamics of the situation.

How many parents can sit through a lose-lose situation such as this? How does this situation make you, as an ASD parent feel?

By the way, the child was hiding in the dog house sleeping until the officials arrived and then he didn’t want to come out because there were strangers in the house who were not supposed to be there. The dog never gave his where-a-bouts away. Loyalty, right?

A child with Autism might respond to law enforcement and first responders differently than a child without Autism, and this reaction has the ability to alarm police and bystanders. Children with Autism also respond to different triggers and cues, and police should be trained on how to identify Autism’s characteristics so that they may be more equipped to help or find the lost individual. For instance, the loud blare of the fire alarm may trigger the “fight or flight” reaction. A child may run and hide, or a child may thrash arms and scream, or even appear to be “rushing” their would-be rescuer.

A wandering ASD child can often be drawn to water, has either a profound lack of fear or sense of safety, or has a fear of many things. Someone who understands this will know to ask parents about the things that trigger their child.

Elevated Situations at School or in Public

Behavior in classrooms has been a hot topic as of late. A high functioning Autistic youth or a youth with Aspergers is often misunderstood and branded a disruption to the classroom. Often times the School resource officers (SROs) are called in for re-enforcement.

SROs are typically employed by a local police or sheriff’s agency, and work closely with administrators in an effort to create a safer environment for both students and staff. The responsibilities of SROs are similar to regular police officers in that they have the ability to make arrests, respond to calls for service, and document incidents that occur within their jurisdiction.

School resource officer programs have also been a topic of great debate in the United States during the past few years.

Certain groups feel that the presence of Law Enforcement Officers inside schools sends the wrong message, and creates an atmosphere that leads to an increase of juveniles being introduced to the Criminal Justice System.

Many groups who feel that the resources that are used to employ SROs could be used to increase the number of teachers and counselors that are available to help students with other needs. Many argue that educators have been dealing with school issues for years, and are accustomed to maintaining a safe environment.

School resource officers have become commonplace in American schools, but support for their continued work is meeting more resistance from those who feel that schools need to be focused on education and not police actions. Some have found that the increase of SROs in the school environment has spurred an increase of children with developmental disabilities and emotional disabilities being introduced into the juvenile justice system.

A mother of a fifteen year old son with Autism is notified at work that her son has been detained at the juvenile justice holding area in her city. Apparently, her high functioning Autistic child had an outburst during class because he was frustrated over changes in the daily schedule and because his peers were taunting him over his outwardly expressed distress over the matter. SROs were called in after the youth kicked over a desk and rushed the teacher. The youth was large in stature so although the boy never inflicted bodily harm, the teacher was in fear for her and the safety of the other students.

When the SROs arrived, the scene escalated to the point that the child was put in restraints and escorted off of the school grounds.

The overlying problem here is that child had a Behavior Intervention Plan (BIP) that the school was not utilizing for such instances. The teacher was unaware of the BIP and the SROs did not understand nor did they have the appropriate training as to the characteristics of those on the Autism Spectrum.

What we need to do is prevent situations in which police are using misguided force or restraint that might otherwise be used in another routine situation. I used to do training for first responders and law enforcement while employed with Juvenile Justice Services for The Arc in the Austin Area. I have since not seen an opportunity to do so in other communities and I am very curious as to how many communities offer this to those who protect and serve.

Some communities have had the foresight to put in place training or workshops for this very prevalent subject. There are many circumstances in which law enforcement and first responders need to be aware of specialized methods of care. Confronting a child (and especially a large youth) with Autism can seem harrowing to anyone, even with the most seasoned officials.

We need to provide our law enforcement with background training on Autism and how it might affect the behavior of the child who has wandered off or when dealing with behavior issues. An encounter with a distressed or lost child with Autism has the potential to be confusing and harmful if police aren’t educated on the nature of Autism.

2 thoughts on “When Your ASD Child Wanders and Disappears”