Autism is real and like many others with the diagnosis, my son, Alex Hale, is succeeding in life on the Spectrum. His two songs “Into the Light” and “Walk a Mile” share his thoughts and emotions on the journey of an Autistic Individual, and assert that there is light at the end of the tunnel. It has been a long journey since his official diagnosis at the age of 6 years old.

There were signs of awkward behaviors, however his pediatrician initially suggested that we didn’t look for “trouble”. Once diagnosed we were in a state of awe rather than shock. We had assumed he would be diagnosed with ADHD or something of that nature. Immediately Alex’s dad and I started asking questions, reading up on Autism/Aspergers and looking for answers and methods to keep Alex mainstream.

Alex is high – functioning and as he says in his advocacy speaking engagements, you may not guess by looking at him, or meeting him initially, but spend a little bit of time with him and you will see that his social skills are a little different.

Sometimes he uses the wrong word to describe something despite the fact that he is very intelligent. As Alex states “Autism/Aspergers is a social disorder, not a mental disorder”, just because some may be non-verbal does not mean that they cannot hear and feel and have their own form of communication.

We have always encouraged Alex to reach for the stars. We believe anything is possible, but you must try. If you don’t try there is no possibility. “MY I’MPOSSIBLE DREAM” was created to assist Alex in finding his true potential as well as seeking out others on the spectrum, and providing them the courage to find their potential as well.

In 6th grade, we were informed (with Alex present) that Alex would never complete high school without assistance. However, his junior year Alex requested that his aid be hands-off, and he proved that he could get through his last two years of high school on his own (yes he had a safety net). Alex graduated with a 3.2 GPA and a scholarship for the music program at Akron University.

Secondly we were told he would never attend college; he attended Akron for 1 ½ years and it was too overwhelming for him. Before he failed out completely we transferred him to Bryant & Stratton College where he has earned his Associate’s Degree in Business Management, and is 4 classes shy of his Bachelor’s Degree.

The psychiatrist who was reviewing her report on Alex pointed to a young gentleman pushing a broom and stated: “Your future is living in a half-way house doing menial jobs, stop dreaming!”. Alex refused to believe her (as did we)!

Alex has dreams; it is not about curing Autism but bringing awareness to society so that individuals on the spectrum will not be shunned or bullied or considered incapable of a normal life. Alex believes the Autistic Mind is a beautiful mind. He has said if there was a pill to take to cure it, he wouldn’t take it because he wouldn’t be ALEX.

So who is Alex?  Alex is a young man with a brain full of sports facts. He is so passionate about sports and the ‘right-way’ to play the game that actually playing is difficult for him. However he can put together a perfect draft for just about any sport, and he believes his future should be with the Cleveland Indians someday, as baseball is his REAL PASSION.

Alex is also a vocalist. He spent many years in youth choir, and school choirs including show choir. He and his uncle, Grammy winner Joel Moss, have teamed up on three songs to date and produced them for a CD which they plan to complete, which proceeds will benefit Autism Speaks.

Autism Speaks has been a great link for Alex, he has been on their walk board for four years and he has performed at a number of their walks. He will be performing for the second year in a row at the Chicago Walk at Soldier Field.

When Alex performs and speaks it is to bring a positive note to those who come out to hear him. He has had his struggles and still continues to have them. Life on the spectrum is not easy, but if he can build a village of support so can everyone else that he touches. 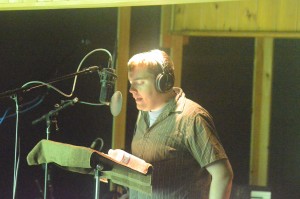 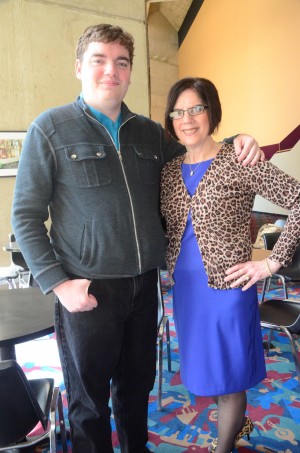 Autistically Speaking with Alex Hale was written by his Mother, Karen Hale.