Each person diagnosed with Autism/Aspergers Syndrome is uniquely different and typically gifted with a special area of interest or talent. Aspergers101.org would like to celebrate those with Autism by spotlighting a picture (you provide) depicting them in their element.

Today we spotlight Nikki Jeanette who enjoys combining the love of drawing with her desire to show a day in the life of living with autism. Nikki created a comic strip series she titled:  “AuTalkz”. 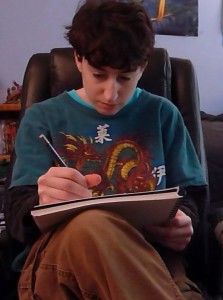 You can find more of Nikki’s work AuTalkz here .

This week’s edition of Autistically Speaking features Nicole, aka “Nikki.” 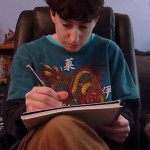 I run the webcomic “AuTalkz”, and I have Asperger’s Syndrome.

When I would get overwhelmed (overstimulated), I would have a panic attack.  I didn’t know how to deal with it, so I just started doodling. In eighth grade, drawing my favorite Dragon Ball and Digimon characters became a way for me to calm myself down while in class, even though it was only a step up from stick figures.

Nikki is the creator of the webcomic “AuTalkz”. She has Asperger’s Syndrome and found relief from panic  attacks by doodling. Nikki wanted to make a comic which went back to the “bare basics” of past comics:  ones l  like Calvin & Hobbes which could teach lessons and procure laughter without the use of bad language and-or  graphic violence….she called […]

“I’m an adult with Asperger’s Syndrome/ASD…and I have a lot to say! It’s both a blessing and a curse; and I don’t mind finding humor in it while teaching folks who aren’t autistic about it, and allowing others who have it to feel they aren’t alone.”

This comic actually touches upon two things (though, I hadn’t intended to do that). My main point is the “mask” we put up, and then I realized that it also lightly touches upon taking things/expressions literally.

On the shorter note, people on the spectrum have difficulties distinguishing between normal tones and sarcasm. There’s also trouble understanding expressions (like “two birds with one stone”), allegories, and metaphors. When I first heard the expression “apple of my eye”, I pictured someone’s eyes reflecting apples, for example.

When I had to read stories in high school on allegory and symbolism, it all went over my head. “Watership Down” is one of my favorite novels, but I still don’t pick up on the symbolism which is apparently in the novel. I’ll explain all that in further detail when I do a comic which actually delves more into the subject. The main subject I was trying to explain with this comic is autism vs society.

Lying doesn’t come easily to me, and is probably the same with a lot of people with ASD.  As for being blunt, there are times when I’ll say something without intending for it to be mean, but it can come across as being rude or hurtful. It’s not because I want to hurt someone or make them feel bad, or don’t have the ability to empathize, but because I either don’t realize that it’s rude/hurtful, or because it just feels more natural to tell the truth even if that means being blunt.

By: Nikki J. Creator of AuTalkz

Stimming is one of the “stereotypical” autistic behaviors. Many people think of people with autism as folks who constantly flap their hand or rock back and forth. Those behaviors are called “stimming”, which is a motion that interacts with the senses to help calm an autistic person down (self calming) if they feel overwhelmed by the environment.

Stimming is harmless, and isn’t just hand flapping or rocking. It can manifest in many different ways, but again, is all harmless.

Nikki J. is a comic artist that uses comedy to depict her personal experiences living with Autism. You can read more of Nikki’s posts on Aspergers101 here and find the rest of Nikki’s comics on her webpage here.

Besides, this, there was another time I made friends with someone 10 years younger than me. It was fun to just forget about the adult world and have fun wrestling on their trampoline or skating the local streets.

While kids can be very judgmental, I often found that the younger crowd didn’t care or question the fact that I was older than them, or see a problem with it. I never saw a problem with it, either. Friends were friends no matter what age they were.

It was also less social pressure hanging out with my younger friends.

Though it can be inspirational to hear that a celebrity has Asperger’s, it tends to be more annoying than anything else. Especially in the cases where someone admits it and was diagnosed long ago, but hasn’t come out and said it until now.

There are a lot of breakthroughs being made in autism research, and psychologists are starting to understand it more and more. I feel it’s become “mainstream”, even.  The diagnosis rate is going up, and people are either getting diagnosed as adults or coming out and saying they’ve had it all their lives.

I’ve encountered a lot of people who hold me on the same expectation level as people without Asperger’s (ie, “normal” people). I don’t want to be treated too differently, but the general analogy is that if I’m a square block, I’m not going to fit through a circular hole.

The first step to any sort of progress is for parents to admit that their kid has ASD; same with employers and teachers. They have to be made aware of it and accept it. Unreasonable expectations come from ignorance or even ignoring the truth, which puts stress on everyone and is very frustrating to the person with ASD.

Aspie Artist Nikki J. is the creator and artist for “AuTalkz.” We are proud to display her insights into life on the  spectrum by way of comic strips. You can see more of Nikki’s work on deviantart.